The new Johnson Valley Off-Highway Vehicle Area is nearly as large as the Imperial Sand Dunes at Glamis and is explicitly designated for off-highway vehicle use under the new law. Included in this area is the entire “Hammers” area, both the front and back side. Spooners, Aftershock, Sunbonnet, the Riffle Monument, and the Cal200 Memorial (The Rockpile) are also located within the preserved off-road area. The majority of the Fry Mountains and full access to Soggy Dry Lake Bed are also guaranteed for off-highway vehicle use, as well as access to Emerson Dry Lake Bed.

This deal is the culmination of a years-long campaign to save the Hammers from base expansion. The famed “King of the Hammers” Race, which draws over 30,000 people to Johnson Valley every year, will continue under the new bill. The Bureau of Land Management estimates that Johnson Valley currently generates more than $71 million annually for local economies.

The Marines would be allowed to use a portion of the nearly 100,000 acre Johnson Valley Off-Highway Vehicle Recreation Area for a maximum of 60 days per year. It would be open to the off-road community for recreational use during the remaining 305 days.

Cook said, “My biggest concern has always been public safety. This agreement ensures public safety, while also balancing the training needs of the Marine Corps with the rights of the off-road community. It preserves California’s most important off-road recreation area for future generations. After years in which off-roaders have lived in fear of the closure of Johnson Valley, this permanently ends the threat of base expansion into off-road areas.”

San Bernardino County Supervisor James Ramos stated, “This compromise reached on the Johnson Valley OHV recreational area is a well-designed plan that will protect our residents, local economy, and our recreation community while allowing the military to maintain essential training operations. I applaud Congressman Cook for his leadership in the House of Representatives, Senator Dianne Feinstein for her support, and my fellow Board colleagues for standing with them on this critical issue.”

San Bernardino County Supervisor Robert Lovingood said, “This is a victory for everyone. The Marine Corps gets land for training while preserving off-roading areas and the economic impact of the King of the Hammers event.”

Dave Cole, one of the founders of King of the Hammers, responded to the deal by saying, “While I am happy that we will be able to continue racing King of the Hammers in Johnson Valley, I am truly thankful that we have preserved the ability of future generations to enjoy this amazing area.”

Robert Lombardo, the Mayor of Yucca Valley said, “Saving a large portion of Johnson Valley not only allows for recreation to continue, but it makes it safer for the residents who would have been located so close to the proposed USMC boundary. I am excited to have the positive economic impacts of the off-road community continue, while allowing the Marines to meet their training needs.”

Mayor Dan Mintz of Twentynine Palms commented, “I’m proud that the voices of our communities were heard by our representatives in Congress, and I’m thankful that the Marines listened. We look forward to continuing our positive relationship with the Marines, while still being able to recreate safely. Off-roading has been a huge economic benefit to our city, and I’m thrilled that this deal will allow it to continue.”

Fred Wiley, the President/CEO of the Off-Road Business Association (ORBA), also weighed in on the deal, “The off-highway motorized recreation community considers this ground breaking legislation a ‘win’ for both the OHV community and the US Marines. A 5-year effort by the California Motorized Recreation Council (CMRC) has demonstrated that it is possible to share land in order to accomplish military training goals and protect motorized recreation areas. If not for Congressman Cook’s leadership, this shared-use agreement would not have been possible. As a result, Johnson Valley will soon be designated by Congress as the ‘Johnson Valley Off-Highway Vehicle Recreation Area’ managed by the Department of Interior.”

A map of the compromise plan for the Johnson Valley can be found at this link: http://cook.house.gov/johnson-valley-map

King of The Hammers Will Continue in Johnson Valley, CA 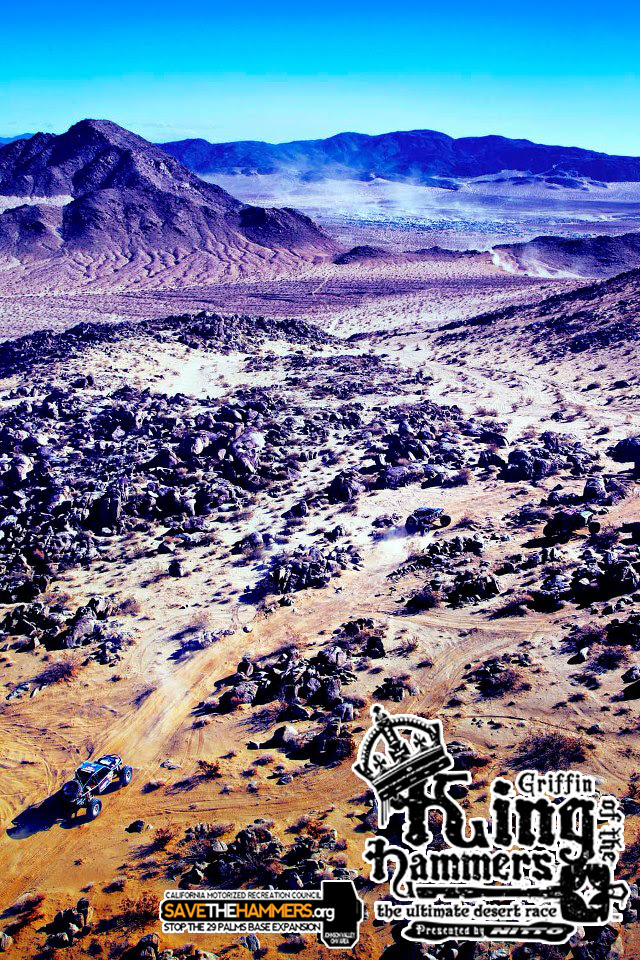 December 11th, 2013: JOHNSON VALLEY, CA:  Hammerking Productions, the founders of The Griffin King of The Hammers Presented by Nitto Tire, are pleased to announce that the week-long off road festival held annually in Johnson Valley, CA will be able to continue in its current location for the foreseeable future. After six years of negotiations between the United States Marine Corps, the federal government and the Off Highway Vehicle(OHV) Community, a deal has been reached to preserve the majority of the land in Johnson Valley for OHV use.

Congressman Paul Cook spearheaded the deal which allows nearly 100,000 acres of land to remain open to the public and managed by the Bureau of Land Management (BLM). The Marines will have access to approximately 55,000 acres of shared use land for 60 days a year to meet their training objectives, but will not retain ownership of the land the remaining 305 days a year.  The proposed legislation is expected to pass  the House later this week and the Senate next week before the holiday recess.

The deal preserves access to the trail system known as “The Hammers.” Areas that were formerly at risk including trails named Spooners, Aftershock, Sunbonnet, and Riffle Canyon as well as the California 200 Memorial at the spot known as “The Rock Pile” on Bessemer Mine Rd. remain open to public recreation under the current plan.  The plan also includes access to Soggy Lake, Emerson Lake and the majority of the Fry Mountains.

Dave Cole, founder of King of The Hammers, had this to say, “This deal is something that couldn’t have happened without the tireless support of the entire off road community. Thousands of people have donated time, energy and money for us to reach this point. Thank you to all who have worked to Save the Hammers for future generations. I especially want to thank Congressman Paul Cook, The California Motorized Recreational Council and The Off Road Business Association for their efforts. We wouldn’t have made it to this point without them.”

It’s not often a bunch of offroaders can wrestle the U.S. Marine Corps to a compromise, but that seems to be exactly what’s happened as U.S. Rep. Paul Cook, R-Yucca Valley, on Wednesday announced a deal on Johnson Valley that allows both the Marines to conduct live ammo training in the region, but still preserves more than half of its 188,000 acres for offroading and other recreation for 10 months a year.

Located in the high desert about 20 miles north of Yucca Valley, the disputed land has been an almost sacred site for the offroading community, known worldwide for its unique mix of wide open desert and rock-crawling trails – dubbed the Hammers – where drivers in custom-built four-wheelers bump and grind their way up hills strewn with massive boulders.

Hitting the trails at the 2013 King of Hammers.

A yearly week of racing called the King of the Hammers draws tens of thousands of visitors to the area, turning the valley floor into an encampment called Hammertown, which is half Coachella and half “Road Warrior.”  The 2014 Hammers is scheduled for Jan. 31-Feb. 8, and event organizers have said the deal will keep the race rolling for years to come. (Desert Sun file photo above by Jay Calderon.)

The offroaders and the Marines have been in a standoff for a couple of years over whether the Corps would take over more than half of valley, 103,618 acres, for expanded training exercises involving three tank battalions, helicopters and a whole lot of live ammunition. The Marines argued such training exercises would be critical to their post-Mideast evolution into a streamlined expeditionary force, and nowhere else offered the land they needed.

Offroaders are generally a patriotic bunch, lots of former military, but the threat to Johson Valley sparked a determined opposition, backed up by the multimillion-dollar offroading industry. The Marines attempted a compromise, offering with a 43,049-acre shared use area, including the Hammers, open to offroaders 10 months a year.

The remaining section of the valley, open to offroaders year round would have been all but separate from the shared use area, connected by only a narrow corridor of land.

High desert communities, led by Yucca Valley, also got behind the offroaders, noting that the King of the Hammers and other offroading events in Johnson Valley meant full hotels and a boost for small businesses in the region. Residents of the small community of Johnson Valley, located across the highway from the offroading area, have also opposed the expansion, mostly because current training exercises on the base already set their windows and furniture shaking.

A map of the deal announced Wednesday cuts the Marines back to 88,000 acres covering the north central and east sections of the valley. The offroaders get a total of about 100,000 acres starting in the southeast corner of the region and curving up to the northwest, including a 56,000-acre shared-use area the Marines will be able to use for training for two months a year, again with limited types of ammunition.

Cook, a Vietnam veteran and retired Marine colonel, emerged as the mediator between the two camps earlier this year, after a visit to the 2013 King of the Hammers.

He authored a bill in the House, passed with bipartisan support and inserted in the Defense Authorization Act, that would have kept the whole valley under the jurisdiction of the Burea of Land Management, with the Marines allowed to train twice a year, but not allowed to use what is called dud-producing ammunition, that is bullets larger than a certain caliber.

Meanwhile, the Marines got their plan through a first hearing in the Senate Committee on Energy and Natural Resources on Nov. 14.

What happened between then and Wednesday is unclear. Cook’s release announcing the deal contains congratulatory quotes from all the stakeholders but no details of how the deal was struck.